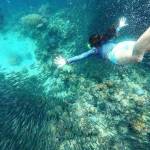 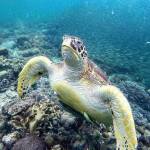 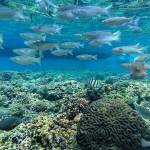 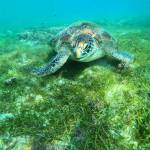 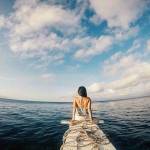 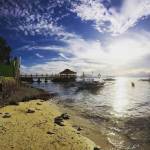 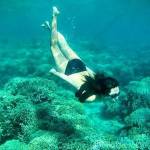 Availability
Up To 12 Pax
Duration
Day Tour Only
Discounted Rate starts at
₱1,499 per pax

Nearly a three-hour ride away from Cebu City, Moalboal is a small, laidback southern town where you can experience the immense “Sardine Run” off the coast of Panagsama Beach.

Around thirty meters off the shore of Panagsama, the reef drops 70 meters deep, and it is where you can see enormous schools of a million bullet-shaped sardines swimming underwater in changing forms and shapes.

The schools of sardines are so many they can be seen from the surface. But nothing compares with diving and seeing the million-strong sardines hover like clouds above the beautiful coral reefs. Definitely a “must-sea” diving adventure!

Pescador Island prides itself as a recreational diving paradise. Around 10-15 minutes away from Panagsama Beach, this small island is almost entirely made up of coral rock where no one is residing, but it has a solar-powered lighthouse and warm waters that harbor very rich marine life, becoming a sanctuary of over hundreds species of fish.

There are some high cliffs in Pescador reaching up to 60 feet. There are also majestic coral reefs and rich marine life that surround the foot of the island. Thus it earned its name Pescador, which in Spanish means “fisherman.”

For Exclusive Group Only
Exclusive Groups have the option to choose their own convenient travel date
Prices based on a per person basis
Bigger groups get additional discounts. Please contact RESERVATIONS to enjoy bigger saving with our group rates

HAPPY JUANDERER TRAVEL INC. has the right to change and/or cancel itineraries without prior notice to ensure safety and better service. Likewise, the company, and all persons representing HAPPY JUANDERER TRAVEL INC. shall not be held responsible or liable to issue refund / any form of compensation for failure to execute the above arrangements due to force majeure, riots, civil war, natural disasters, acts of God or conditions beyond our control.

By confirming registration and downpayment, HAPPY JUANDERER TRAVEL INC accepts that client is agreeing to all terms and conditions stated in this form.

∎ Reservations shall only be confirmed upon payment.
∎ Down payment is NON-REFUNDABLE.
∎ All advance payments can be transferred to another person if he/she is joining the same TOUR DATES

∎ Prices published fall under promo rates and are not applicable for credit card payments. Should client prefer to pay via credit card, this will be subject for an additional service charge.
∎ Special tour dates might be subject to regular rates.

∎ Van Seating arrangement is on a first come, first serve basis.
∎ Tour Operator has the right to cancel tours when the minimum number of participants (10 pax) is not reached. GUESTS HAVE THE OPTION TO:

∎ Booking changes must be made 21 days in advance.
∎ For instances of cancellation or “no-show”, guests are still liable to settle balance and full amount of package.

∎ For instances of cancellation or “no-show”, guests are still responsible to follow hotel policy.
∎ NO REFUND shall be given in case clients decide to change hotels/resort once booking is confirmed.
∎ Issues or complaints concerning the hotel / accommodation must be directed to hotel’s representative for proper assistance.

∎ All tour participants must be in good physical and mental condition to join all activities specified in the tour package.
∎ All clients must attend briefing / orientation and a signed waiver must be furnished before the start of tour.